A chapter of UTOPIAN PULSE – FLARES IN THE DARKROOM

Between February and September 2014 a series of 7 large-scale banners (9 x 3,4 meters) will be presented on the façade of the Secession. They relate to the uprisings, occupations and social movements that have emerged in recent years. The artists are invited to focus on the utopian pulse in these actions and movements. This is most clearly manifested in the integration of how and what was being fought for, a break with the-ends-justify-the-means politics which discredited communistic thinking and politics for so long.

In the period when Syntagma Square in Athens was occupied in active opposition to self-defeating austerity policies, the principles of true democracy was evident throughout. Debates as to actions, methods and alternatives were open, respectful and decisions made on this basis. They included who and what would be spoken to a wider public.

In Tahrir Square, Cairo in 2011 a determination that the machinery of state violence could be overcome by surrounding tanks was crucial in the early victories of the movement. This should not be forgotten in its defeat by rival forms of authoritarian politics. Part of the failure by the initial movement was to build durable democratic structures. In Istanbul just last year the determination was to hold the common property of a park that made life bearable in the city, an action with global resonance of defending the commons against the many forms of predatory enclosure.

All the artists in URGENT ALTERNATIVES: UTOPIAN MOMENTS have in common that they are directly involved in the protests they focus on in their banner, or talk from a clear, unequivocal position of solidarity.

This initial series of banners can be seen as symptomatic of how utopian thinking, which for years seemed to be buried, has revived with a sense of urgency. It is the idea that things can carry on as they are which is real wishful thinking.

This series will then directly evolve into a second series of banners created by a group of artist-curators—Ayreen Anastas / Rene Gabri1, Zanny Begg, Mariam Ghani, Miguel A. López, Pedro G. Romero/Archivo F.X., Christoph Schäfer and Bert Theis—who will produce one banner each between September and November 2014 in relation to their 1-week long research exhibitions in the Secession.

1 These artists reject the term “curator” for their practice. 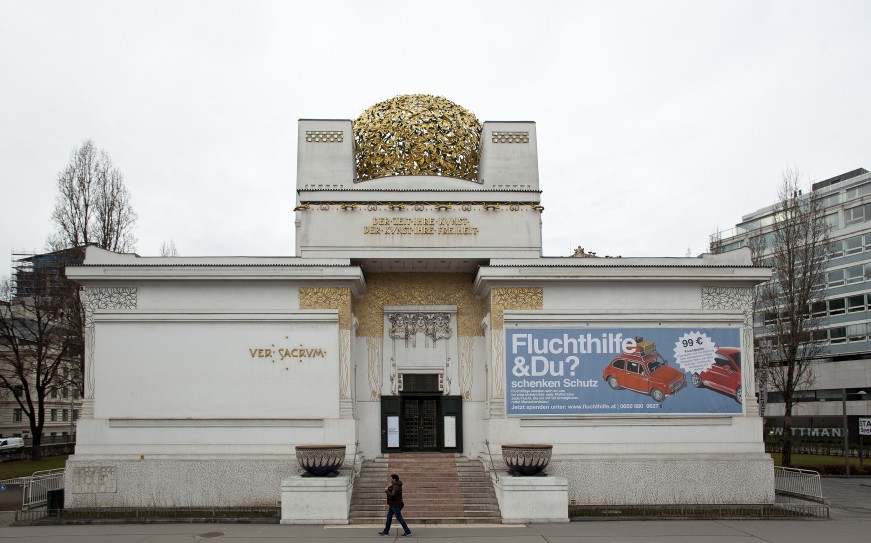 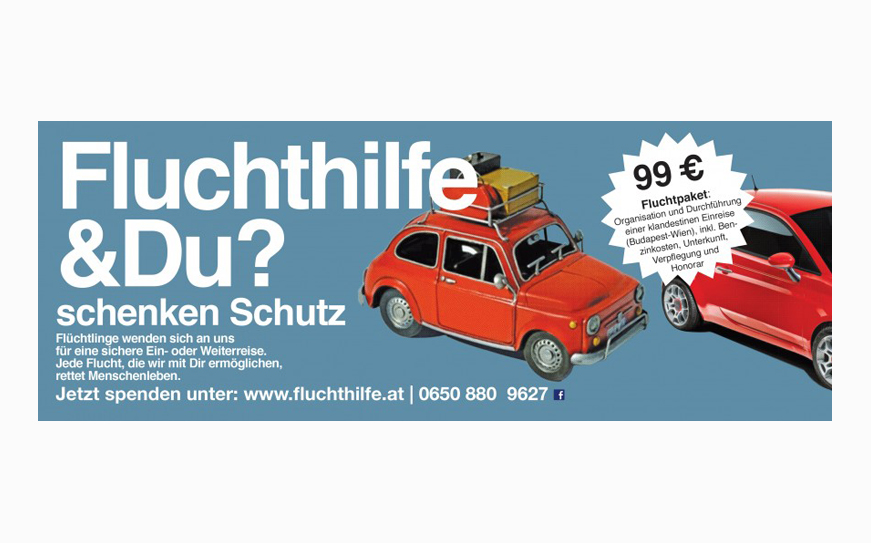 Fluchthilfe & Du addresses the critique of the EU border regime and its migration policies expressed by the self-organized refugee protest movement in Vienna. The design of the banner, titled Fluchthilfe & Du? (Escape Aid & You?), echoes a current campaign by the Caritas, which collects donations with an appeal to charity while distancing itself from those it denounces as “people smugglers”: those whose assistance to refugees made it possible for them to come to Austria and apply for asylum in the first place. Fluchthilfe & Du envisions aid to refugees as a service and publicly solicits support for their struggle for freedom of movement.
The work was created as an act of solidarity with those activists of the refugee movement who have been held in custody since July 2013 and accused of being members of an international people smuggling organization. The charges—that they supposedly made millions and endangered the lives of refugees in transit—have been rebutted, but the Austrian interior ministry continues to criminalize them. 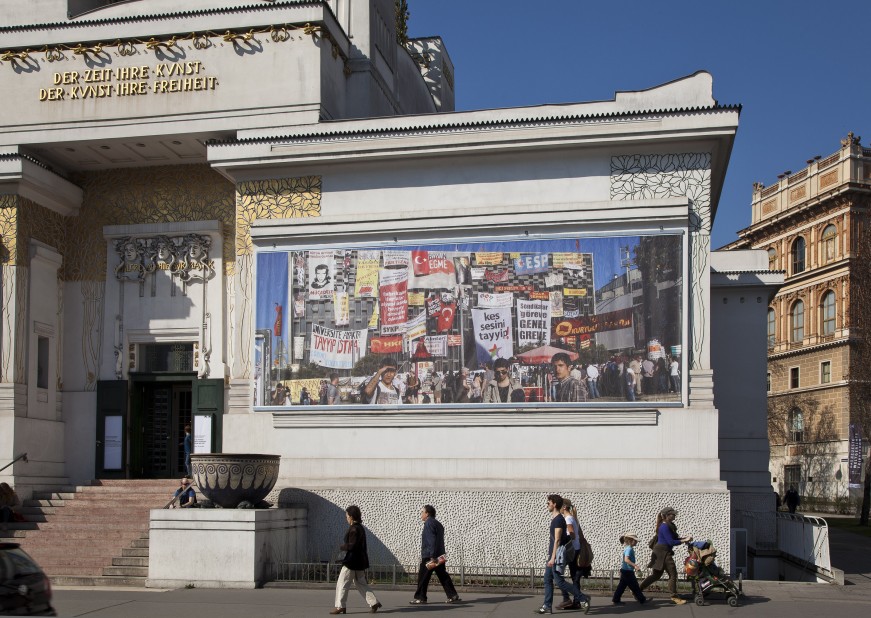 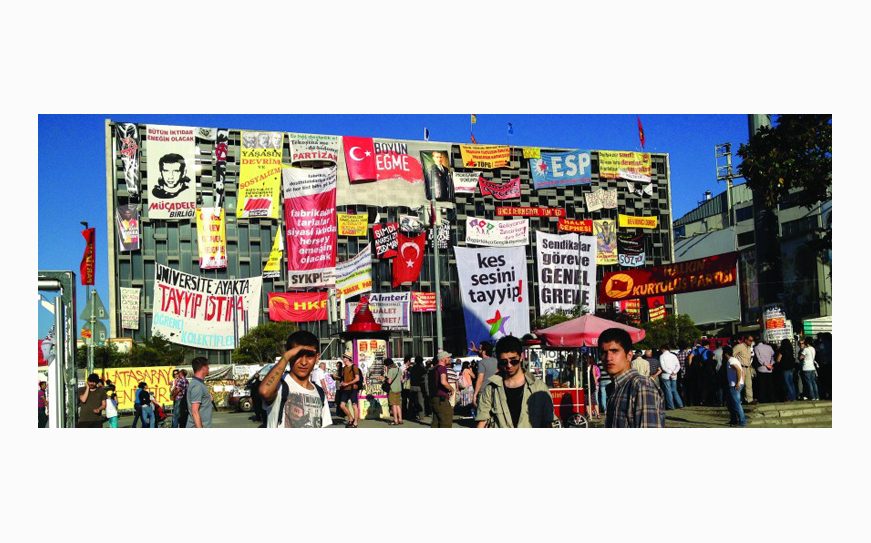 Historically and culturally, Taksim Square is Istanbul’s beating heart, the center of the city; a meeting point both for tourists and locals. On May 1 each year, International Worker’s Day, hundreds of thousands gather in the square and march down Istiklal Street waving their flags and banners. Since the 1970s, Taksim Square has been a platform for people for protesting, and the empty façade of the AKM Cultural Center became a canvas for protesters’ banners and posters. The square was also the site of the 1977 Taksim Square Massacre, when several political groups clashed leaving thirty-four dead and many others injured.

On May 31, 2013, when a few of Gezi parks’ trees were cut down and the police attacked the peaceful protesters, they put up banners against the government and their urban ‘regeneration’ project on the façade of the AKM. The neighborhood of Sulukule, which for six centuries hosted the Roma population of the city, had already been demolished in 2006 as a part of this urban transformation project. The kids of Sulukule, who named their hip-hop group Tahribad-ı Isyan (Rebellion or Destruction), voiced the anger, resistance and hope not only of themselves but of the people of Istanbul. In this photo, their mouths are shut, but the AKM’s façade speaks out loud. 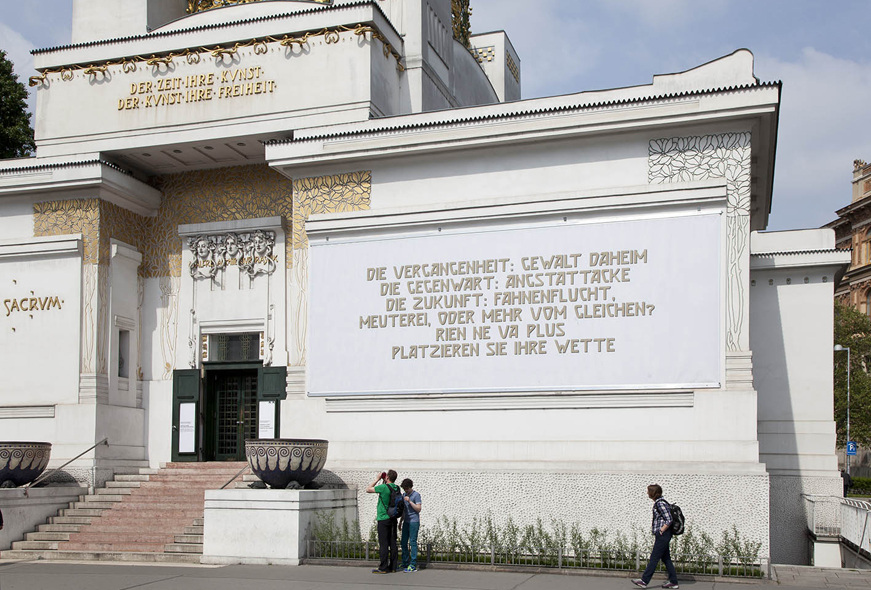 2  The vacant lot where the fate of the past is fought over.

SELF-ESTEEM  /selfɪˈstiːm/  n.  Consent to the conditions that compose the self. 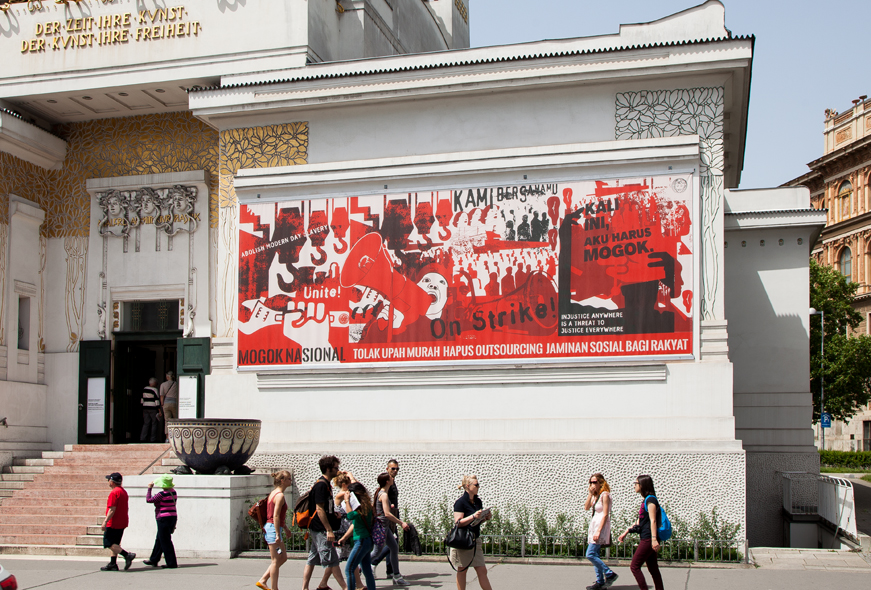 The banner is based on a series of posters that were produced during the general strike of the Indonesian Labour Union in 2013, one of huge global significance in a world in which corporate capital is constantly seeking the lowest wages and cheapest working conditions. The union’s demands were for wage increases, social security for the people, and a ban on the outsourcing of production. The strike failed in realizing its aims, but the union continues to fight for their demands to be met.

Nobodycorp. Internationale Unlimited was founded in 1993 by Alit Ambara, artist and activist of Cultural Network (Jaringan Kerja Budaya) in Jakarta. Nobodycorp. became a label for bodies of works that emerged from ideas, discussions and activities inside Cultural Network. 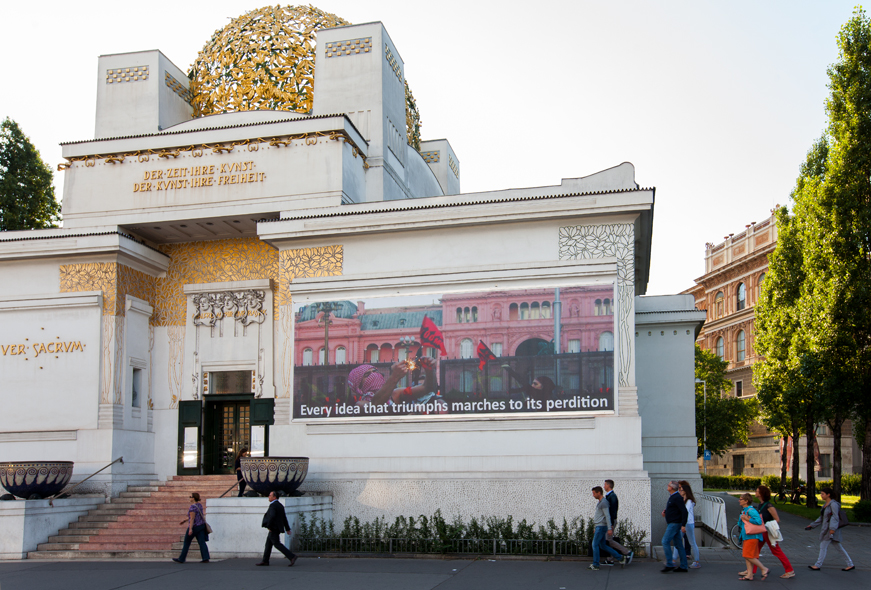 The Errorist action B.A.N.G was carried out in Buenos Aires during demonstrations celebrating the anniversary of the 19/20 December 2001 uprisings, which were significant utopian rehearsals. The picture is a metaphor of the ending of the cycle of social uprisings and revolts, and the beginning of the so called “normalization process”. This proceeded in stages, undermining the utopian nature of what developed during 2001 when the country experienced a deep crisis of representation. On the back, the Casa Rosada, the Argentinian government building is guarded by fences and police, while Errorist cells actions highlighted this ‘normalization’ and what it involved; most of all the application of an anti-terrorist law to control and criminalize the social protests. 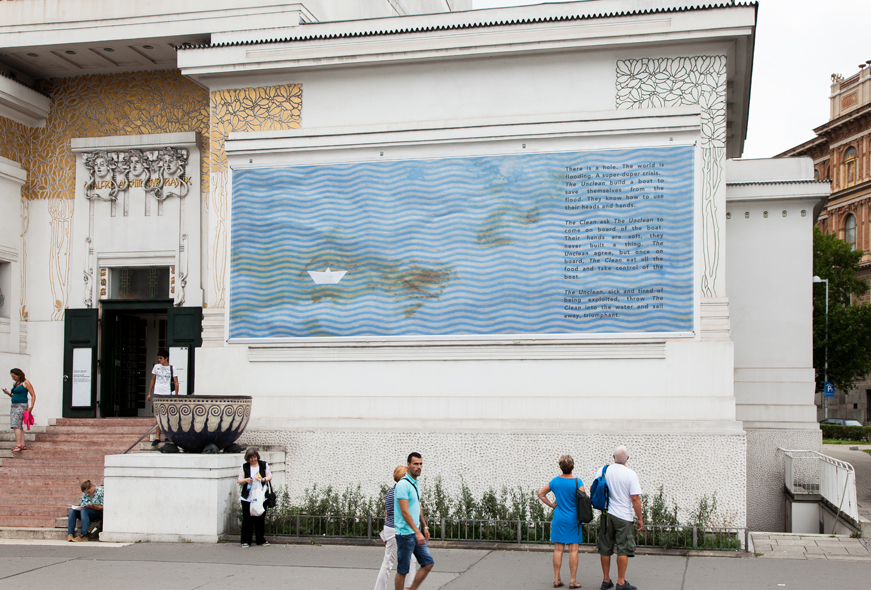 The World is Flooding

The World is Flooding, takes Mayakovsky’s free-to-use play Mystery Bouffe* as both structure and starting point for collective works in which the figure of the Eskimo has been developed as at once a whistleblower, a messenger, an innocent child forming an early comprehension of the system and a newcomer experiencing a new environment for the first time. The figure of the Flood came to represent that which is ‘too much’; too many feelings, too many demands, too many traumas, while the Boat is a saving device which, alas, is liable to be taken over by the privileged.

The World is Flooding-zine is free and available to download as a PDF on request from info@oreetashery.net and was done in collaboration with Freedom from Torture, UKLGIG, Portugal Prints, and Tate Modern.

Oreet Ashery is a London based, interdisciplinary visual artist. Her practice is socially and politically engaged and often takes place in public spaces and tends to include participatory and interactive elements. 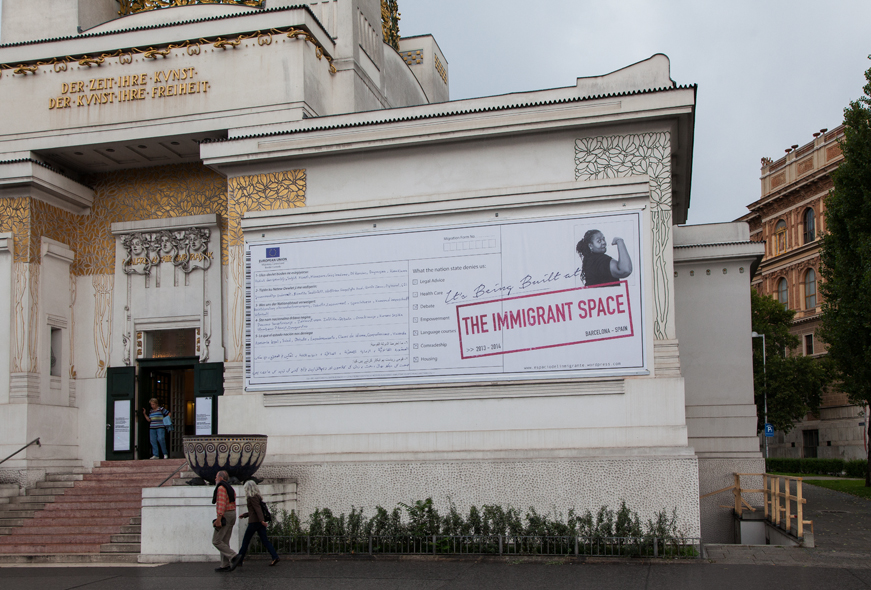 The Immigrant Space is an occupied building that works as social center and housing in Raval, a neighborhood in downtown Barcelona. The social center focuses its work on creating spaces of debate and empowerment by and for people whose rights are restricted by immigration law. Basic services such as health care, legal advice, and language classes are also provided, with a strong emphasis on autonomy and civil disobedience. The space is open for organizing screenings, talks, and activities that aim to collaborate in the struggle against racism, classism, xenophobia, patriarchy, and paternalism.

Daniela Ortiz’s work aims to create spaces of tension where conceptions of race, class, nationality, and gender are explored in order to foster a critical understanding of the structures of inclusion and exclusion in society. In the past several years, she has developed several research projects mainly focused on domestic labor in Peru and migratory control systems in Europe and United States. Many of her projects have been developed in collaboration with Xose Quiroga, with whom she coedits the independent news medium Antigonia.com.

Daniela Ortiz was born in Cuzco, Peru, in 1985.
www.espaciodelinmigrante.wordpress.com